Christopher Nieper, Managing Director of fashion firm David Nieper Ltd, has put his home town of Alfreton on the national map in his address to the Conservative Party Conference in Manchester this afternoon.

Championing social justice in the community, Christopher outlined his vision to create a ‘new deal for Britain’s forgotten communities’ escalating the Derbyshire town of Alfreton to the top of national debate.

Alfreton is a former coal mining town; the Index of Multiple Deprivation (IMD) indicates that the town has some of the most deprived neighbourhoods in the area, with attainment in education significantly lower than the national average. (CSJ Reports) 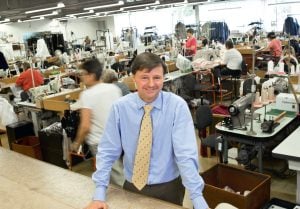 David Nieper Ltd has been one of the largest employers in the town for almost 60 years and has always placed social justice at the heart of its business model, committed to creating local jobs and developing skills within the community.

In 2016, the business took the unprecedented step of sponsoring their local school which had become symptomatic of the community’s social and educational breakdown.

The school was in the bottom two percent in the country for attainment, 48% students were on pupil premium, there were teacher strikes, a paedophile scandal and students leaving in droves – sometimes up to 10 a day.

“This school had suffered enough. These families had no-one fighting their corner. They had been let down by previous governments and I was deeply concerned for the future of the children, their families and the knock-on effect for the whole community and local economy. Our family business had moral obligation to step in.

What I have learned since then, is that Alfreton is not an isolated case. All over the UK there are literally hundreds of communities like Alfreton, Boris calls them the ‘left-behind towns’…I call them the forgotten towns.

These towns need a voice and proper representation – I was hugely encouraged to hear Boris pledge his support to these  ‘forgotten people’ and ‘left-behind’ towns in his first speech as Prime Minister, at last support for communities and for companies like ours fighting for social justice.” 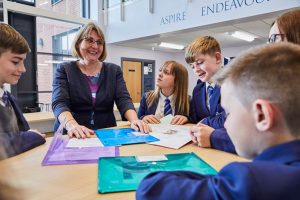 “The David Nieper Academy takes a pioneering approach to education and offers a unique formula for the worlds of business and education to work together promoting opportunity and social mobility.

After less than three years under new governance, the school has moved up an Ofsted rating and tripled its intake of students moving up from primary school creating a waiting list for the first time in over twenty years.”