The episode offers a unique glimpse behind the scenes of a fashion shoot on board the world’s most iconic cruise liner, now a maritime museum and floating hotel in the heart of Dubai. 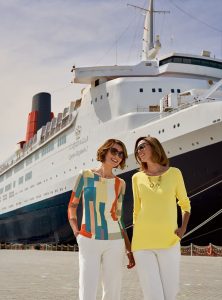 With up to 70 percent of David Nieper customers taking regular cruise holidays, and many of them on QE2 during her hay day, the ship offered a sophisticated, very British and nostalgic backdrop for this season’s collection.

“We love to forge partnerships with brands that share our values, and with its British heritage the ship has much in common with David Nieper.  Like us, the QE2 is a child of the 60s both brands were born in the golden age of British fashion and manufacturing, a time of big, exciting ideas and revolutionary styling.

It is also quintessentially British with royal ties. Similarly, we’re proudly, thoroughly British, and have a few royal links of our own. Over the years we’ve been visited by HRH The Countess of Wessex and HRH The Princess Royal.”

Built in Scotland in the 1960s as a transatlantic liner, the QE2 began decades of service sailing 5.6million miles and carrying 2.5million passengers. It even transported 3,000 troops and 650 volunteer crewmembers during the Falklands war.

Lorna Kavanagh, Head of Marketing for David Nieper who directed the photo shoot earlier in the year added:

“It was an honour to be part of the documentary charting the history of the QE2. 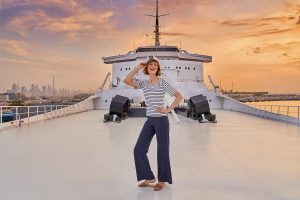 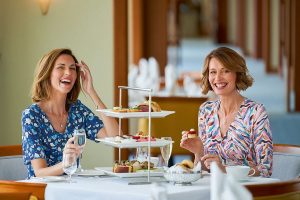 David Nieper has been renowned for our travel wear for decades and the elegant, nautical surroundings of the ship perfectly framed our collection.

On board we were spoilt for choice in terms of locations for our shoot – from stylish bars, the newly opened Queen’s Grill, a traditional English pub, and even exclusive access to the bow of the ship, which gave us all kinds of different stories to tell.” 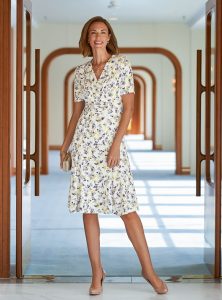 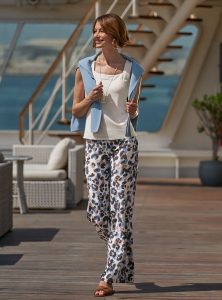