In the world of business, as in politics Brexit has polarised opinion. Since the utterance of the word referendum, Christopher Nieper, Managing Director of David Nieper – a leading UK fashion design and manufacturing business, has been careful to watch the impact on business both here and in the EU.

Over the next few weeks as our politicians are encouraged to vote to take no deal off the table, this Derbyshire business is convinced that no deal is the only deal on offer that is worth having.

Established in 1961 and with a staff of over 350, David Nieper has a vested interest in Europe – it exports one third of goods to EU countries, employs staff in EU countries and has for many years worked with suppliers of wool and fabrics in the EU.

With its far-reaching network of European connections, David Nieper welcomes the opportunity to leave behind the shackles of EU bureaucracy. The business has no fear of Brexit, but instead takes the view that the 29 March 2019 offers an unprecedented opportunity to create a launchpad for British business and we should seize the day, rather than fear it. 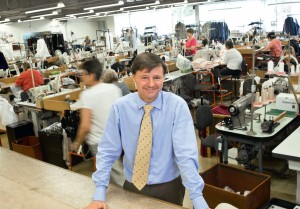 “The public has had the courage to vote for real change, but since then politicians have lacked the wherewithal to deliver it.  Business is much more optimistic and agile than the Westminster bubble realise and our economy is in a strong position.   The best deal will come after we leave and we should use the £39bn as a bargaining tool.

I’m relaxed about Brexit.  There is no cliff edge, and our customers won’t stop wearing clothes. Indeed, customers are buying more and more British made goods since the referendum and we’re investing more in our business than at any time in our 57 year history.

What I’m not relaxed about is Westminster wasting a once in a generation opportunity to take back control, rebalance the British economy and put us back as a global player standing on our own resourceful British feet.”

At David Nieper, since the referendum business has been booming – sales are up, more recruits than ever are graduating through the David Nieper Sewing Academy and the company is investing in the country’s first digital printing plant for jersey fabric.

“In our business we trade with EU companies and will continue to do so post Brexit. We also trade with non EU countries such as Switzerland -we don’t see trading with EU post-Brexit to be any more complicated.

We don’t fear trade tariffs, indeed since the referendum the increase in competitiveness of GBP has already more than compensated for any tariffs we would anticipate. British goods have become more competitive in Europe and we’re using the extra margin to reduce our EU prices and increase our advertising to build more EU trade.”

For further media information and to arrange interviews contact: