Reacting to the Prime Minister’s speech this week, a Derbyshire businessman who during the Covid 19 crisis converted his fashion business to supply vital PPE, has urged the Prime Minister to put manufacturing at the heart of his ‘New Deal’ for Britain.

Christopher Nieper, Chief Executive David Nieper Ltd, called upon the government to target its massive £238b procurement budget on the UK’s neglected manufacturing sector to both stimulate an industry renaissance and “build, build, build” the home front.

He commented: “Judging by the phenomenal national response of British manufacturers at a time of crisis, the sector is in great shape to help Britain bounce back. We suggest this is the moment where we unleash the power of manufacturing to reboot the economy, through harnessing the full potential of public sector procurement.” 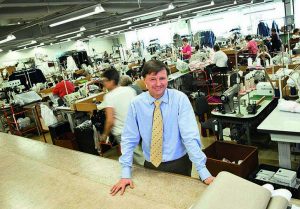 Mr Nieper, who this year switched his factories’ production to making reusable surgical gowns and scrubs for 21 British hospitals, was disheartened to see recent reports that the country is ordering 3 million surgical gowns from China and Cambodia, while the UK jobless total continues to rise.

He continued: “Let’s start rebuilding Britain by adopting a more pro UK delivery and ordering agenda. I’d urge Lord Deighton to set an example and rescind his Cambodian and Chinese orders and buy British. Wouldn’t it be preferable to make these 3 million gowns in the UK and create thousands of jobs at the same time?”

“This is the watershed moment to rethink our national spending. Should we not consider replacing the policy of ‘how cheap can we get it’ with ‘how can we support our own economy in this time of crisis?’

“The government has huge spending power so why not use it to better effect?  It makes no sense to export work to the other side of the world and deny our own country the jobs and investment we so desperately need.

A public procurement test might be a win-win for us all and a foundation stone for Boris to level up Britain.”

For further information and interviews with Christopher Nieper contact: